Home »Business»They announce the first Apple Event of 2021 where they will present the new iPad, we tell you how to see it live

Apple is expected to unveil the new generation of iPad and AirPods, as well as the long-awaited AirTags, the iOS 14.5 system update and news for Apple TV.

Apple fans are beyond excited as the tech giant announced its first special event of 2021 . They are expected to introduce new products, including the updated versions of the iPad and AirPods , as well as the rumored AirTags and other surprises.

Siri was the first to reveal details of the ‘Spring Loaded’ event . Days before officially announcing it, Apple’s smart assistant could already offer data on the date if asked “Siri, when is the next Apple event?” , as discovered by the MacRumors portal.

The first Apple Event will be held virtually on April 20. Tim Cook , CEO of the company, will chair the event from Apple Park, the company’s headquarters in Cupertino, California.

What releases will we see at the Apple event?

The mysterious invitation sent to specialized media announced that “novelties of all colors” are coming .

The phrase and the drawing of an apple made with strokes ‘by finger’ (a logo that is already enabled as a hashflag on Twitter), would be a clue to the launch of new versions of their iPad tablets, which are usually updated around these dates. 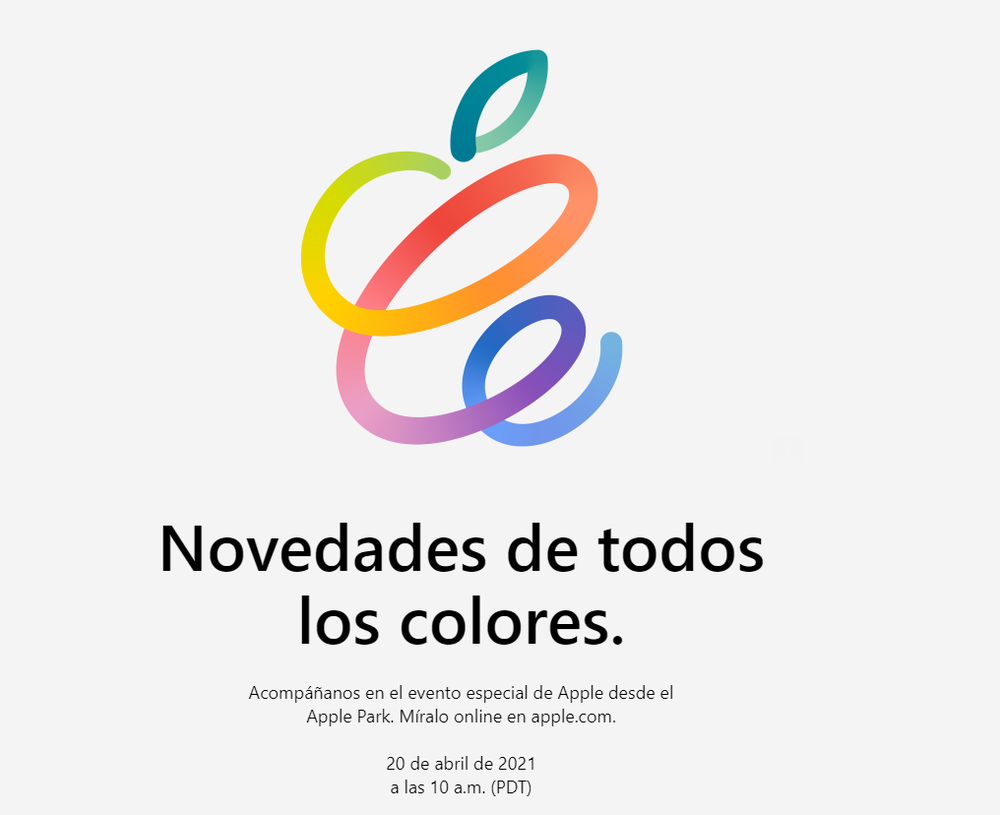 It would be an iPad Pro that incorporates for the first time a screen with super bright mini LED technology. This would have an A14X Bionic processor, with performance close to the Mac’s M1, better cameras and a Thunderbolt port, according to Bloomberg. We could also see the new iPad Mini , with smaller bezels and a larger screen.

In addition, the company is expected to unveil the new generation of AirPods 3 headphones, with a design closer to that of its high-end AirPods Pro, spatial audio support and touch controls.

Another surprise could be the debut of the rumored Apple AirTags , smart tags to track the exact location of objects through an iPhone app.

Rumors suggest that exciting updates for Apple TV will also be revealed. According to specialists, now it would have a new remote control, a more powerful processor and compatibility with 120 Hz displays (which would imply an HDMI 2.1 port).

It is speculated that Apple will dedicate part of the presentation to iOS 14.5 , the next version of the iPhone operating system. This will include some controversial privacy features to prevent advertisers such as Google or Facebook from collecting activity data for commercial purposes, unless explicitly permitted by the user.

What we will continue to wait

Although it would be time to renew Apple’s MacBook Pro and MacBook Air , it is unclear if an update will be presented next week.

It has also been leaked that Apple is developing other smart gadgets, such as virtual / augmented reality glasses and a headset with mixed reality technology , but most likely we will not see them in this presentation.

As is tradition, the new iPhone models will be released until after the summer.

The appointment to see the first Apple Event of 2021 is this Tuesday, April 20 at 12:00 noon (Central Mexico time), on the official Apple website . In addition, live streaming will be enabled from the company’s YouTube channel.

There we will see if all the speculations and leaks are true.