Home »Business»Don’t let it happen to you! This man lost $ 560,000 to Bitcoin scam on fake Elon Musk account

The fever for cryptocurrencies , especially Bitcoin , has caused hackers to devise elaborate methods to steal these digital assets. This is the story of Sebastian , a man who lost $ 560,000 by falling for a Twitter scam through the fake account of an alleged Elon Musk .

The victim narrated to the BBC how he fell for the Bitcoin fraud , known as a ‘gift scam’ . It all started when Sebastian, a 42-year-old German, saw a mysterious tweet from the tycoon.

” Musk tweeted ‘Dojo 4 Doge’ and I wondered what it meant,” the man recounted. “There was a link to a new event below so I clicked on it and saw that it was giving away bitcoins! ” .

Like many onlookers, Sebastian clicked on the link and came to a web page that seemed legitimate. There he found a countdown timer and a ‘quiz’, supposedly run by the Tesla team. The dynamic consisted of sending from 0.1 bitcoins (with an approximate value of 6,000 dollars) to 20 bitcoins (about 1.2 million dollars), with the promise of doubling the amount at the end.

After double checking the verification logo next to Elon Musk’s name, he decided to participate. “’Take the maximum’, I thought, this is definitely real, so I sent 10 bitcoins, ” says Sebastian. 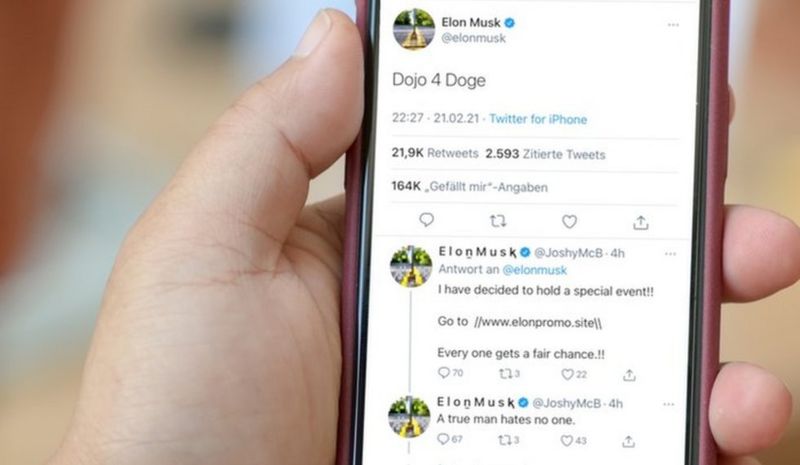 This is how the tweets of the false Elon Musk with which the Bitcoin fraud was committed looked. Credit: BONGKARN THANYAKIJ / EYEEM / BBC.

And the disappointment arrived …

Excited, the man waited 20 minutes for the timer to hit zero, but the prize never landed on his Bitcoin wallet.

“I realized then that it was a big lie,” continues Sebastian, who asked the BBC not to use his real name. “I threw myself headfirst into the sofa cushions and my heart was pounding. I thought I had just thrown away my family’s life preserver, my early retirement fund and all the vacations to come with my children . “

Despite e-mails to the scammer’s website and tweets to the fake Elon Musk’s account, nothing could be done. Three weeks have passed and Sebastian is almost resigned that his money is gone forever.

Notably , Sebastian’s 10 bitcoins were the largest recorded amount ever lost in a single such transaction , says Whale Alert , an Amsterdam-based blockchain analytics company.

The boom of Bitcoin scams

According to analysts, during the first quarter of 2021 the scam gangs have made more than 18 million dollars in this way. This amount exceeds the 16 million dollars that they obtained during all of 2020 .

While scam methods are getting more and more sophisticated, one of the most common is the one Sebastian fell for.

This consists of creating Twitter accounts posing as personalities like Elon Musk . In some cases, criminals use accounts stolen from prominent individuals that already have the ‘verified blue check mark’, thus they appear legitimate and trustworthy. Then, they wait for the real accounts to tweet and publish a response with the invitation to the scam, which seems to be made by the famous person in question.

In July 2020 , the most notorious Bitcoins fraud took place, when hackers accessed the Twitter accounts of celebrities such as Bill Gates , Kim Kardashian and Elon Musk . From these, they invited millions of followers to send bitcoins with the promise of giving them double back. In the end, cybercriminals stole more than $ 118,000 worth of Bitcoin and three people were arrested.

With information from the BBC .