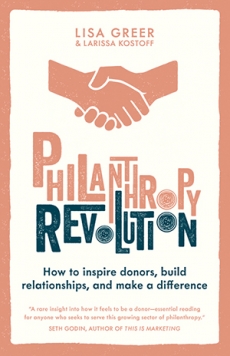 Philanthropy Revolution: How to Inspire Donors, Build Relationships and Make a Difference

For two decades, charitable giving in the US has been steadily declining, and while economic factors and world crises explain some of this drop, experts have missed one overriding factor: For Millennials, Gen Xers, and most people under 70 who have the capacity to make significant gifts, donating to charities is too often onerous, dehumanizing, and exhausting. As a donor, board member, and businessperson, I see an impending crisis in the $410-billion world of philanthropy.

About 10 years ago, I became, almost overnight, a One Percenter and a major donor. Coming from both corporate life and the entrepreneurial world, I was shocked by the arcane, unproductive, and often offensive business practices in the nonprofit sector. Researching further, it became clear to me that the current system of giving is in dire need of an overhaul.

Philanthropy Revolution is a narrative, prescriptive guide that offers fundraisers and anyone concerned about the health and future of nonprofits a clear message: Older donors are dying, and the new crop of potential donors is walking away. Put the humanity back into fundraising now, or thousands of worthwhile causes will suffer. The book weaves together my personal story with anecdotes from dozens of prominent insiders—donors, nonprofit professionals, and leading academics in the sector.

Most current and prospective donors today crave organic connection and impactful collaboration. Yet the techniques that most nonprofits use to fundraise are often a turn-off: gala dinners; wasteful, manipulative lunches; and a style of communication meant to keep would-be activists ignorant and happy.

If today’s fundraising tactics make donors feel that the price of giving is their humanity—their trust in other people, the quality of their relationships, their ability to bring all of their assets to the table—why would they become, or stay, givers? Keep reading for an excerpt from Philanthropy Revolution: How to Inspire Donors, Build Relationships, and Make a Difference.—Lisa Zola Greer

As something of an alien on planet philanthropy, I’m awed by what I’ve seen: incredible generosity on all sides, as well as a whole lot of stuff that doesn’t work and that definitely doesn’t support our causes. Because I care and because I’ve got chutzpah, I’m going to continue to call this stuff out. But I’ll also propose a solution. In the coming chapters, I’ll lay out a more humane approach to fundraising that’s supported by research (my own, and that of others) and validated by what I’ve learned in business. I’ll be asking nonprofits to be more upfront in their communications, more authentic in their relationships, and more transparent in their practices generally. I’ll also insist that those readers who are already philanthropists work hard to create a sector that’s less stratified and more focused on cause and integrity.

In the process, I hope to convince you that for every disappointing interaction in fundraising, there exists a meaningful alternative that has a bit of a snowball effect: it increases our chances of delivering measurable impact. Not only do I believe this with head and heart, I’ve witnessed it firsthand. And I’ve talked with so many funders and fundraisers whose positive stories are proof. So, as something of an antidote to all the bad news, I’m going to leave you with one last story before we move on to the next chapter. It’s about an experience that keeps Josh and me going, where the sector is concerned, one that occurred very early in our lives as philanthropists.

We’d just moved into the house I described in my introduction, and I extended an invitation to visit to David Levinson. David is the founder and director of Big Sunday, an amazing nonprofit that connects people who want to volunteer or donate with other organizations that need help. We wanted to explore how Josh and I could make a significant impact in supporting our city’s most needy.

Although it was our first meeting with David, it felt like the second or third. Granted, we went into it with huge admiration for Big Sunday’s mission, that of harnessing absolutely everyone’s instinct to give. But David also came informed. This enabled us to zoom through all the stages involved in the getting-to-know-you portion of meetings.

We knew we were aligned. We didn’t need to conform to the metrics that so many organizations require (those six or seven touchpoints of cultivation, for example, which often feel to donors like ‘prescribed’ communications and outreach – snail mail, email, phone call, event – all designed to get us to give).

The three of us just put it all out there. ‘What do you care about?’ David asked.

I loved the directness of his question, and in response we discussed some of the most pressing needs in Los Angeles, where we live. These were many, what with the country still being in the fog at that time of the 2008 recession. Throughout the conversation, David was engaged, informed, and utterly reciprocal. He didn’t pander, and not once did he pretend that we weren’t talking about a gift.

As we were wrapping up, I put forward what I thought was a great idea. ‘David,’ I said, ‘What if Josh and I were to feed every hungry person in Los Angeles for three months? What would it cost?’

He paused. ‘Let me work on that and get back to you.’

A few weeks later he returned to our home for a follow-up meeting. Again, I asked: ‘What would it cost to feed every hungry person in our city for three months?’ I was convinced at that point that my idea was brilliant.

And David’s response? He said, ‘I’m not going to tell you.’

Then he went on. ‘Lisa, it’s irrelevant. It’s a bad idea because it’s not sustainable. You feed everyone for three months and then what? What happens in month four?’

Okay. I was listening.

David sent us a proposal after that, which included a number of workable options. Among them was something we called the ‘End of the Month Club,’ an initiative so named for the way it would address the high demand experienced at the end of each month by food banks, whose clients have used up all their money at that point, and need help to feed their families. The idea was to engage corporations and institutions, as well as volunteers, to ensure that the pantries would be stocked at exactly the point that the food-insecure need them.

We told David we loved the idea. At which point he gave us a number for what it would cost, assured us we could fund the requisite staffing, and we were sold.

What I appreciated about the interaction, and all the more in retrospect, is that David didn’t come with prepackaged ideas, nor did he present a number that he’d determined in advance. We had a real conversation of substance. He took the time to research my idea but also came up with something better. He gave me a figure based on cost, and not our perceived ‘capacity.’ And, because we’d established a real connection, he was able to tell me my idea was lousy. Not only that, I was able to hear him!

And the result? The End of the Month Club, which we continue to fund, has leveraged our initial donation to the extent that it now collects and distributes many hundreds, often thousands, of food items every month. In addition to the food banks of the original proposal, these items go to nonprofits, schools, afterschool programs, senior centers, vets’ centers, and any place else where people are hungry.

Also, the End of the Month Club has kickstarted multiple initiatives for Big Sunday relating to food insecurity, which together have attracted attention from supermarkets, food manufacturers, and other corporations with a desire to help. Every November, as just one example, the organization gives away more than 30,000 items as part of its popular annual Thanksgiving Stuffing Event.

That’s a lot of goodness, and all of it stemming from a single, straightforward, and humane interaction between two rookie donors and a fundraiser.

Putting the Humanity Back Into Fundraising

Something special happened when David engaged Josh and me as thinking, feeling people whose reasons for having the conversation in the first place were not all that different from his own. For me, it’s an ideal model.

It also makes certain things clear. If organizations want to stay relevant, they’re going to have to realize that what’s personal in our relationships – it can’t be faked. Donors see through it. And nor can the ‘professional’ be faked. Donors of all ages want more information about the nonprofits they support than they ever have in the past, and with good reason. We’ll delve into nonprofit governance issues in Chapter Five. In the meantime, I suspect nothing I’ve said in this chapter is particularly earth-shattering. Our best philanthropic educators understand that change is necessary, and they’ve got some great advice about how to embrace it. But the clock is ticking, and while some organizations are ready or maybe even living this change already, many others are nowhere near.

In the most cynical recesses of my heart, I wonder if it’s because the sector’s old guard is getting ready to comfortably retire – at just about the same time as our old donors will pass. After all, if these institutional bigwigs can manage to maintain the status quo, at least for now, they won’t have to deal with the hassle (as well as the enormous complexity) of guiding their organizations into the future.

Yes, innovation and change are inherently uncertain. But it’s high time we did this differently, and started teaching it differently, too. There are so many development professionals out there who can’t wait to deliver substantial change to the sector, but who are also very reasonably afraid that, if they don’t make their targets… well, programs get cut, employees get fired; at worse, beneficiaries suffer.

It doesn’t have to be that way. In the coming chapters, I’ll share more of my story, and integrate the wisdom and experiences of my peers: donors, volunteers, nonprofit professionals, and academics from the Lilly Family School of Philanthropy, the College of Civic Life at Tuft’s University, and elsewhere. I’ll also offer actionable advice that will help chart the way forward for all of us.

Wouldn’t it be great to get to a place where organizations trust donors enough to be transparent, and donors trust organizations enough to let them lead? That place is where we realize that we want the same thing: organizations that are as effective as they are visionary, and outcomes that change the world.